On February 8th, Scott Baker and I went to check out Cable Choke Falls. This was my 5th time at this falls. I have enjoyed checking out some of the history from this creek. During the late 1800’s and early 1900’s there was a large scale logging operation that spanned the length of this gorge covering the falls with a log flume. A lot of the remnants of the flume can still be seen, including the cable in and across this falls. I had run it once before at higher water and I really wanted to run it again this season. After scouting the approach of the falls I was a little indecisive until Baker said he wanted to run it. Sometimes it’s a big relief when your are not the only one dropping off the lip. After a full scout of the lead-in it appeared to be a completely different falls this time. The lead in was bumpy and hard to control with the off angles on the rocky approach, but we made the best with what we had.

Final analysis; It goes with hard hits and It’s much better with more water!

The Wallowa Mountains are a mountain range located in the Columbia Plateau of northeastern Oregon in the United States. The range runs approximately 40 mi northwest to southeast between the Blue Mountains to the west and the Snake River to the east. The range is sometimes considered to be an eastern spur of the Blue Mountains. Also called the “Alps of Oregon” Much of the range is designated as the Eagle Cap Wilderness, part of the Wallowa–Whitman National Forest. The highest point in the range is Sacajawea Peak, at an elevation of 9,838 feet above sea level. The Wallowa Batholith is formed of granite from a magma upwelling in Late Jurassic and Early Cretaceous time (between 160 million and 120 million years ago)

Most precipitation in the area is orographic precipitation. Near the tops of the mountains, total annual precipitation can exceed 100 in per year, as opposed to 10 in in the valleys. The Lostine River is a tributary to the Wallowa River draining northwest from the north side of Eagle Cap.

Before this trip Matt King had dialed in a few rivers in the Wallowa’s and after a cross-country road trip, back home for 8 hours, I was on my way to the Lostine with Jacob Cruser. We met up with Tygh and Matt and headed to the river.

After the put-in the Lostine tilts on edge and the whitewater begins. A lot of blind turns and consistent gradual gradient goes until the first long boulder garden. 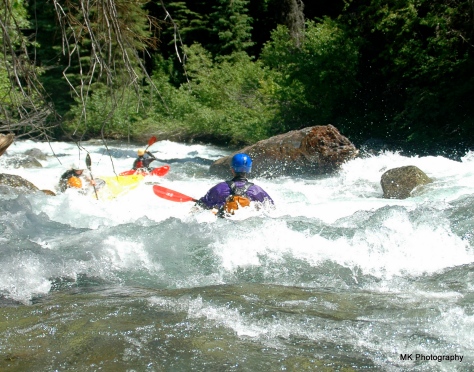 The last couple rapids build into vertical walls with an intimidating rapid to exit the gorge and reach the take-out. After ducking a log-jam and catching an eddy on river left, you can see the take-out eddy downstream on river left…in between is the exit crux. This section can be seen from the take-out bridge. Scout well and have fun. The Lostine as well as the greater Wallowa’s are packed full of adventure.

The Lostine was an instant classic with easy access, flat water put-in shortly followed by non-stop action. The character starts out with fast paced shallow boulder gardens that eventualy forms into a bedrock gorge before the take out bridge.

For video on the Lostine River and a couple other Wallowa Classics, check out this edit by Jacob Cruser

Flows: Flows are hard to catch in the Wallowas, but the best time is the spring/summer run off when the rivers slowly drop into a good flow range
Take-out: High bridge on Upper Lostine Rd.
Put-in: About 4 miles up the rd. near the first calm pool.

Souther Creek is located just a couple miles east of the town of Stevenson, WA on hwy 14 at a spot known as Sweeney’s Corner (Curves between Stevenson and Carson). The falls have adopted that name over the years by locals. There is a small pull out at the creek and the falls can be seen upstream of the road. A short trail takes you face to face with the falls.

At the base of the falls on the left side (Facing it) there is an abandoned and unsuccessful mine shaft.

These picture were taken just after a heavy rainstorm in the fall/winter. In the summer the flow drops to near a trickle. It is a nice detour stop on your way through the gorge on the Washington side. I have yet to explore further up the creek for kayaking, but I will post when I do.

The best source for information on whitewater of the Columbia River Gorge!